You Are Here:
Home
/
Proposing change within EU 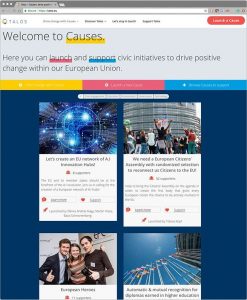 Talos is a new platform to help facilitate positive change within the European Union. This is a citzens driven initiative by a group of young people – students at University College London (UCL). Their aim is to provide an online platform through which EU citizens can propose reforms, which can lead to institutionalised change within the European Union.

Article 227 of the Treaty of Functioning of the European Union guarantees the fundamental right of EU citizens to petition European Parliament. The e-petition system allows us to raise awareness and request solutions to our challenges.

Any citizen of the Union, and any natural or legal person residing or having its registered office in a Member State, shall have the right to address, individually or in association with other citizens or persons, a petition to the European Parliament on a matter which comes within the Union’s fields of activity and which affects him, her or it directly.

However, since it’s introduction a lot has changed and Talos seeks to be a step between grass roots movements of citizens within the EU and some of the political structures of the EU.